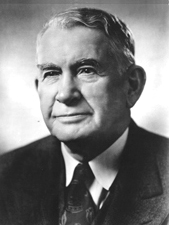 Alben William Barkley (November 24, 1877 - April 30, 1956) was an American politician who served as the 35th Vice President of the United States from 1949 to 1953 under President Harry S. Truman. Prior to the Vice Presidency, Barkley served in the U. S. Senate from Kentucky for over twenty years, and was Majority Leader of that body from 1937 to 1947.

❝The best audience is intelligent, well-educated, and a little drunk.❞[+]