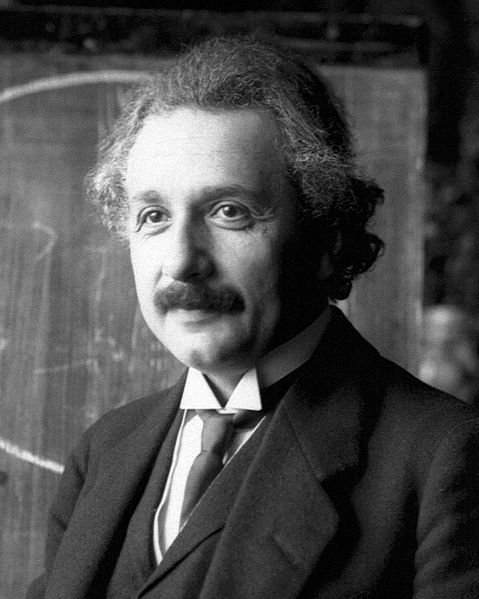 Albert Einstein (14 March 1879 - 18 April 1955) was a theoretical physicist who is widely regarded as one of the most influential scientists of all time, and the 'greatest physicist ever', according to a 1999 poll of leading physicists. His many contributions to physics include the special and general theories of relativity, the founding of relativistic cosmology, the first post-Newtonian expansion, explaining the perihelion advance of Mercury, prediction of the deflection of light by gravity and gravitational lensing, the first fluctuation dissipation theorem which explained the Brownian movement of molecules, the photon theory and wave-particle duality, the quantum theory of atomic motion in solids, the zero-point energy concept, the semiclassical version of the Schrödinger equation, and the quantum theory of a monatomic gas which predicted Bose - ;Einstein condensation.

❝All of science is nothing more than the refinement of everyday thinking.❞[+]

❝Life is like riding a bicycle: to keep your balance you must keep moving.❞[+]

❝Many things which go under my name are badly translated from the German or are invented by other people.❞[+]

❝People like us, who believe in physics, know that the distinction between past, present, and future is only a stubbornly persistent illusion.❞[+]

❝Technological progress is like an axe in the hands of a pathological criminal.❞[+]