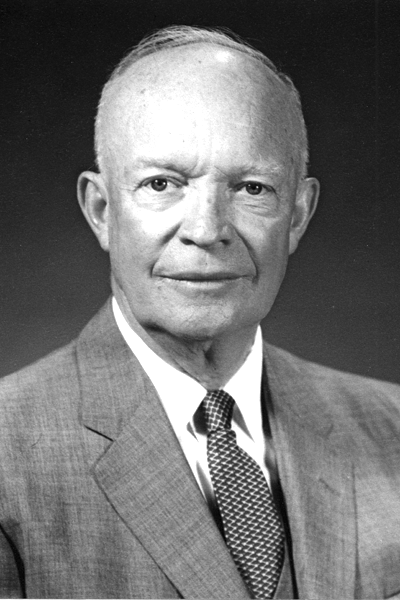 Dwight David 'Ike' Eisenhower (October 14, 1890 - March 28, 1969) was a five-star general in the United States Army and the 34th President of the United States, from 1953 until 1961. During the Second World War, he served as Supreme Commander of the Allied forces in Europe, with responsibility for planning and supervising the successful invasion of France and Germany in 1944 - 45. In 1951, he became the first supreme commander of NATO. As President, he oversaw the cease-fire of the Korean War, maintained pressure on the Soviet Union during the Cold War, made nuclear weapons a higher defense priority, launched the Space Race, enlarged the Social Security program, and began the Interstate Highway System. He was the last World War I veteran to serve as U.S. president, and the last president born in the 19th century. Eisenhower ranks highly among former U.S. presidents in terms of approval rating. He was also the first term-limited president in accordance with the 22nd amendment.

❝An intellectual is a man who takes more words than necessary to tell more than he knows.❞[+]

❝Things have never been more like the way they are today in history.❞[+]